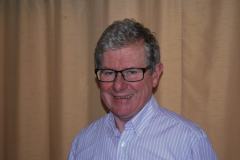 Adrian was born in Sligo, Ireland 61 years ago. He commenced working at 18 years of age with a local oil recycling company. Over the next 43 years of his working life, he held senior management roles and or directorships in oil recycling company’s in Ireland and the UK, a print media company, management consultancy and oil distribution companies in Ireland. His most recent role was General Manager of Topaz Local Fuels.

Adrian got married to Nuala in July 2012. Adrian has three adult children, from a previous marriage Louise, Ian and Marc, a son-in-law Jo and daughter-in-law Debbie and two grandchildren Eve and Eamon.

Adrian has always loved boats and being on the water. He has owned a number of boats over the years. More recently he has enjoyed sailing on the East Coast of Ireland in a Westerly Centaur. He and Nuala are members of Clontarf Boat & Yacht Club. Now they have purchased C’est La Vie for their gap year adventures.

Adrian has enjoyed the Gap Year so far but is also looking forward to coming home in February and getting involved in the business world again.