The last Run for Topaz

My last engagement for Topaz was to take part in the Aware Run in the Phoenix Park on the 14th December 2013. I have always been interested in keeping fit and when Topaz asked all departments within the company to make a special effort and get involved in the Aware Run, I made a bet with my own staff in Topaz Local Fuels that if they volunteered to do the run, I would also.

Six agreed, the new manager Stephen Middleton and five of the staff; Brian O Sullivan, Caroline Smith, Pat Coyle, Sara Denver and Sinead Burke. So that put it up to me and I had to go into serious training to manage the 5k! Another 55 staff from Topaz also took part including the Managing Director John Williamson.

I did not realise how unfit I had become until I tried to do the first 5 k training run. I knew I had better get into serious training or I would never make it! Luckily my son Marc came to the rescue and he agreed to help, by training with me. For the three weeks prior to the run, we trained 3 or 4 mornings a week and without his encouragement and support I would never have manage it!

The day of the run was wet and breezy. There was a large crowd and the event was very well organised. All the Topaz Local Fuel staff started together but we were soon separated in the large crowd of runners with some of staff ahead of me and some behind. I then caught up with a retired teacher John (who does some voluntary work in Aware) and we stuck together, encouraging each other, as we crossed the line in a very respectable 31 minutes. 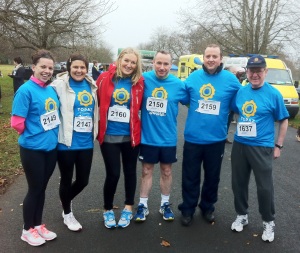 Brian O’ Sullivan is missing from the photo as he went on to run the 10k!

When all the congratulations had been exchanged and the goodbyes said again, it was time for me to leave as I was heading off to work on the boat in Tarmonbarry. In some ways it was a bit of an anti climax as I had to walk the length of the Phoenix Park in the rain before getting a taxi home but I was happy that I had managed the run. That the Topaz Local Fuel staff had done me proud and my last job in the company was raising money for Aware, a very good cause. 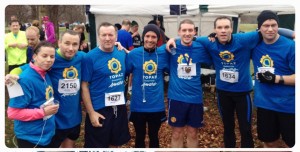 Some of the Topaz Energy Team

This entry was posted in Getting Ready for Gap Year and tagged jogging charity run. Bookmark the permalink.

2 Responses to The last Run for Topaz