What I feared Most Happened

I have always said to Nuala, that on the Gap Year, the biggest risk was that one of us would get sick. The boat is great, designed and built to handle all the different type of water conditions we have meet on the trip. We had carefully planned the journey to try and cover every possible eventuality (some would even say we brought too much stuff including our stuffed cat from home) but we could not guarantee our health.

I don’t know how it happened, but I have had a terrible pain in my left knee, for the last week. I have been hobbling around and finding it hard to walk any distance. I blame it on the fact that I have not being exercising properly for the last three months.  It has been very hard to find suitable places to go for a run in the mornings as we are in different locations each day.

For the last week I have been trying to sort out the knee myself, putting on ice packs, taking it as easy as I can and taking Nurofen Plus, but there has been no improvement. Yesterday  ( Monday 23rd June) I hit a crisis, as when I walked to the bus, to take us into Mainz to buy a new GPS dongle for our software ( another story), I could hardly walk .

Nuala carrying the back pack for a change!

As we walked around Mainz, the pain worsened.  It was so bad that Nuala offered to carry the rucksack for me! After finding the store and buying a GPS dongle, I started to hobble back towards the bus. Sightseeing was out of the question.  Nuala then spotted a sign for a large medical practice, which included an Orthapedic practice. I was in such pain that I agreed to go in and try to get an appointment. The staff were very helpful and while it was a very busy practice they arranged for me to see the doctor, after a short wait. It ended up that Dr. Svene  who ran the practice saw me. 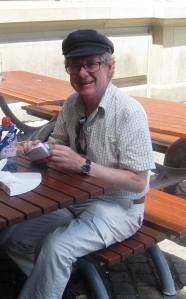 Adrian taking his medicine after visit to doctor

Thankfully, he did not think I had caused major damage but thinks I have pulled a ligament. He prescribed painkillers and rang a local shop to arrange for me to get a support sock and a pharmacy to give me painkillers. He explained to them that I did not speak German and was here on holidays. It was all very efficient as the pharmacy was in the same building. He spoke perfect English and was very interested in our Gap Year trip. He asked me loads of questions about the boat and how we had got it to this point. He himself had rowed on the Rhine and knew the river. He spent so long talking to me about the trip, so much so that one of his staff knocked on the door to remind him that he had other patients waiting! The only issue for me was the bill! €334!

Adrian writing this blog with his foot up

They could not take a credit card, so Nuala had to walk to the cash machine in the bus station to get the cash and go back and pay them!

I am now sitting on the couch, with my leg up, typing this blog and hoping we will be able to move on. Unfortunately,  my knee has forced us to stay another unplanned night in Schierstein.

A well deserved break after our hard day!

This entry was posted in On the Journey, People We have Meet on the Gap Year, Places visited and tagged Dr. Svene, Mainz, on the gap year, Schierstein, The Rhine, torn ligament in the knee. Bookmark the permalink.

8 Responses to What I feared Most Happened