The Rhine Again- going up stream now – a different story!

Posted on September 9, 2014 by agclontarf

We are back on the Rhine again since last Friday. I was going to write a blog about buying carpets for the boat but that will have to wait as going up river on the Rhine is happening now and is a lot more interesting.

Michael, Nuala and Adrian outside one of the iconic buildings in Dusseldorf

We arrived in Dusseldorf on Friday night, having completed our first 10 km going upstream on the Rhine. After leaving the Rhine Hearne Canal at Duisburg, we were in a hurry as we were meeting Nuala’s cousin, Michael Keating in Dusseldorf at 6 pm. We made it at 5.45 pm as the current was so strong. We only averaged 6.5 km per hour (to put this into prospective the average human walking speed is 5 km per hour). Michael is Nuala’s first cousin. He lives in Germany with his wife Dagmar, their sons David, Julian, Matthias and his dog. He made a great effort to come all the way to meet us. We had a great night out and he got the last train home at 1.45 am

We gave ourselves a day off the next day and went sightseeing in Dusseldorf, as on the way down my knee was so bad I was not able to get off the boat. Dusseldorf is a very modern high speed wealthy city, with the largest Japanese population in Europe because there are many Japanese companies in the city. It was a big change for us after being in East Germany for two months.

On Sunday we set off on the Rhine again, heading for Cologne 56 km away. It took us 8 and ½ hours to get there. We had to run the engine hard and look for every opportunity to reduce the effect of the currents by hugging the bank shoreline. We found it much more difficult to manage the barge traffic going upstream. You had so little extra power to spare that you had to make the correct decision in plenty of time, otherwise you could not get out of their way. 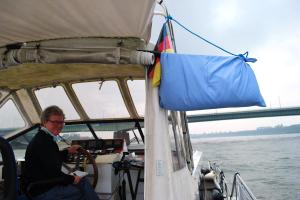 The other danger was that as the Rhine is low we could run aground and we did! We suddenly went from being in 3.5 meters of water to the boat coming to a stop gently, I think on a sand bank. You should have seen the worried look on Nuala’s face. Here we were stuck on a sand bank again, as the last time was on the Oise River in France. That time a friendly barge had to pull us off. This time the barges could not help because the current was so fast. 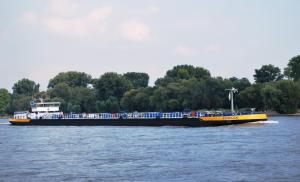 Barge called Adrian going up stream with us

So she is thinking how we are going to get out of this one! Using the bow thruster, I managed to get the boat to swing around into the full current and the force of the water pushed us down river and we were free. Phew! We arrived in Cologne at 5 pm,  tired but we had mastered the Rhine for another day and the boat had been well able for it. We are now sitting in Cologne writing this blog with the current rocking the boat in the marina.

One of the crooked building of Dusselfort- specially designed

This entry was posted in Experiences on the Canals, front page, Places visited and tagged blue boarding, blue boarding on the canals, Boating on the Rhine, Cologne, Duisburg, Dusseldorf, East Germany, Japanese in Dusseldorf, Oise River in France, Rhine Hearne Canal, The Rhine. Bookmark the permalink.