Visit to Lyon- Very Impressive – We will have to go back

Last week we spent a night and day in Lyon. It’s the third largest city in France. We decided to stop over on our way to the airport for a return trip to Ireland. We got a pleasant surprise! 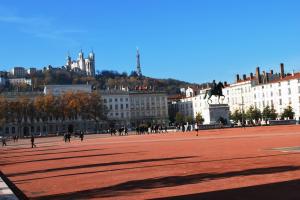 On our Gap Year, we continue to try to explore new areas in France. When flying to Ireland for a short visit, via Lyon Airport, we went the day before the flight so we could stay overnight and explore the city. What a surprise we got!! Lyon with its  2 million inhabitants is the biggest French city we have visited since Paris. A vibrant beautiful city filled with restaurants,  craft workshops, museums and a very well preserved medieval city centre bound by two major rivers. 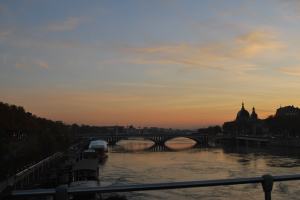 Lyon is the junction of where the Rhone and Saone rivers meet. (We are wintering on our boat on the Saone at Chalon.) This, from Roman times made the city a very important trading centre. It’s wealth comes from this trading culture and the founding and building up of the biggest silk industry in France. This has brought wealth to the city over the centuries and this is demonstrated through the large open squares and beautiful buildings of the old city and the modern city which has spread out from the banks of both rivers up into the hills overlooking the Rivers.

In twenty four hours we managed to fit in a ‘hop on hop off’ tour of the city, a walk around the island between the two rivers, lunch in the old town centre, a visit to a museum of miniatures and movie props and then the History of Lyon museum. 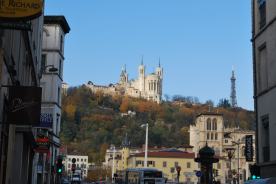 In previous blogs, I have written how some small French towns along the canals are dying with shops being forced to shut down, the post office only open for four hours a day three days a week. But then you visit Lyon and you see a thriving vibrant economy. Lyon has always been an independent innovative city.  It did not support the French Revolution because at that time it was doing better than a lot of France and people already had a better quality of life. 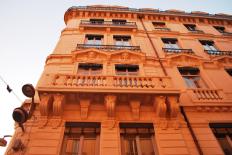 So I think what we have seen (which is the same in every economy) is that the towns along the canals originally accumulated their wealth from the traffic on the canals and when that traffic switched to roads, unless the townspeople adjusted to the new economic reality quickly, they lost out. So rather than as I thought, it’s the French economy declining, what I was actually seeing was the effect of a permanent and fundamental structural change, as transport of goods shifted from canals to roads.

These types of changes have being going on since time began and when people cope well with change they prosper. So I learned more than just about Lyon during the visit. There is so much more to see and do in Lyon. We definitely will have to make a return visit.

View of Lyon skyline from the hill

Close up of minature of Maximes in Paris- fantastic detail

This entry was posted in On the Journey, Places visited and tagged Chalon, history of lyon, lyon and the french revolution, Lyon France, museum of miniatures in Lyon, Place Bellecour, Rhone and Saone Lyon, things to do in Lyon. Bookmark the permalink.