When Marc was here we made a return visit to Dijon, 70km and one hour away from Chalon. Cote d’Or and its capital Dijon, was home to the Dukes of Burgundy from the early 11th until the late 15th century.

Dijon was a place of tremendous wealth and power and one of the great European centres of art, learning, and science. Of course, it is also famous for its mustard.

The Duchy of Burgundy was a key in the transformation of medieval times towards early modern Europe. The Palace of the Dukes of Burgundy, a hugh complex in the city centre, now houses the city hall and a museum of art. The Duchy at one stage included parts of Holland and the wealth it generated is clearly seen in the city that was the capital of its Empire.

Tombs of John the Fearless and Philip the Bold

Dijon was under siege by Swiss and Imperial armies in 1513, occupied by anti-Napoleonic coalitions in 1814 and by the Prussian army in 1870–71. It was also occupied by Nazi Germany beginning in June 1940, during WWII, when it was bombed by US Air Force B-17 Flying Fortresses, before the liberation of Dijon by the French Army and the French Resistance on 11th September 1944. Thankfully, it did not suffer too much damage and has many of its original buildings.

The city authorities have set up an Owl trail around the city and we had fun following it. We started by parking our car in the underground car park at Place Darcy in the heart of the city at the start of the Owl trail. Following the trail, we visited among other interesting places Jardin Darcy, Porte Guilaume (18th Century Triumphal Arce originally in the city walls), the Covered Market, Notre Dame, Place du Theatre and the Palais des Ducs et des Etats de Bourgogne.

Of course, we had to stop for lunch. We went to a restaurant beside the Covered Market. There we had a typical French lunch which took two hours. We were all very adventurous with our food! Nuala had pigs feet for starters, I had white pudding with snails and for main course Marc had Tete de Veau (Cow’s head). We had to wash it down with a glass or two of wine. Suitably fortified, we continued on the Owl Trail which included for good luck, rubbing the head of the Owl on the side of the Notre Dame Church. 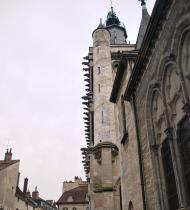 The false gargoyles on Notre Dame

The church of Notre Dame is a masterpiece of Burgundy architecture, including rows of false gargoyles and the Jacquemart Clock. Philip took this clock as war loot from Courtrai in Belgium and gave it to the town in 1383 in recognition of their help with the Flanders War.

The Palais de Ducs is enormous and shows the power, wealth and influence of the Dukes of Burgundy at the height of their power. It is one of the few well preserved medieval palaces in France. The Salle des Gardes in the palace houses the tombs of John the Fearless and Philip the Bold two of the Dukes. The palace today also includes the Musée des Beaux Arts which includes many wood carvings and statues.

We had to finish off a visit to the town by calling to the harbour in Dijon. It’s on the Canal de Bourgogne. Our friend Roger Collins had stayed there for many years on his barge Silhouette while his children attended the universities in the city.

We wanted to check it out for future trips. We would love to live on the harbour on a boat at some future time and explore more of Dijon.