Thursday was the change of crew date. The plan was that Nuala would arrive by air to Beauvais Airport, hire a car and drive to meet us in Douai. Then Bill and Michael would drive the car back to the same airport and fly home. Neil had to go home to England by train. We reached the centre of Douai at 10.30 am on the 3rd April. 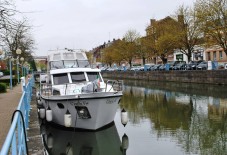 We managed to get the boat right up into the centre of town and found shore power. Now that I had my VNF key could connect to it. I had been looking for a good place for Nuala and I to spend the first few days after she arrived. Also we both needed a rest after the hectic few weeks we had we before leaving Ireland. This place was perfect and is free!! As we had moored along Quay de la Barque all I had to do was ring Nuala and give her the street address to put into the Sat Nav and she was able to drive to exactly where the boat was moored. 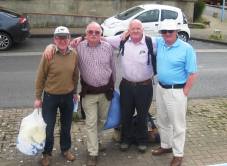 The Dover Delivery team before splitting up – note the bags of dirty laundry!

Nuala arrived at 12 noon, just in time to say good bye to Neil before we walked with him to the local station for his 1 pm train. Bill and Michael left at 5.00pm for their flight after helping us clean the boat, get the laundry sorted and stocking up at Carrefour. That was the point that the Deliver team stood down, having done what they agreed to do which was get me and the boat safely to Douai and thus the end of a chapter.

Having persuaded Bill, Michael and Neil to help me bring the boat across the Channel and stay with me for the first 5 days on the canal was a stroke of genius on my part. I had extra help and advice when crossing the Channel and figuring out how the canal system works. If Nuala and I had tried to do this on our own it could have turned into a disaster and started the Gap Year off on the wrong footing.

I really enjoyed their friendship and company and we had loads of funny moments. I think the lads also enjoyed the adventure as well, the only complaints I got was about various members of the crew snoring, but you better ask them for their version of the trip. 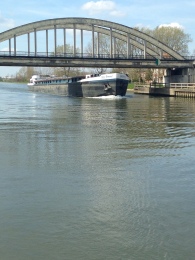 Now it’s just Nuala and I and after our few days of rest we will continue on our journey down the Saint Quentin Canal – then we will see how we manage the boat on our own!