How much Diesel do we have? Will we run out of fuel?

The boat is very economical and has used a lot less fuel than I thought throughout the Gap Year. However I did get fed up of doing countless calculations and worrying if we would run out of fuel or not as the boat fuel gauge is not accurate. So I came up with a solution before we got onto the Rhine.

When we bought the boat I was surprised that it has such a big diesel tank holding 800 litres of fuel. Now that we have cruised in France and Germany for five months I know why. Particularly in France, it can be very hard to find diesel for boats. You will see from the photos that we have had diesel delivered by truck, from barge bunker boats, from pumps at a filling station and once by me in cans from a filling station.

Price for fuel has varied enormously, we have paid as little as € 1.35 to as much as € 1.75 per litre. So it’s important not to run short and be forced to buy when the price is expensive like when I had to buy fuel from a bunker barge – see the photos.

So now by opening the value, the oil flows into the tube and shows me the exact level of fuel in the tank. So recently in Oberwinter Marina (on the Rhine) when the marina offered me fuel at €1.45 per litre, I could check how much fuel I actually had left and confidently say thanks, but no thanks!, I will make it to Luxemburg for the low duty fuel and save money.

I noticed when I was putting up the photos for this blog that I am in all of them but one. Normally Nuala is the one in the photos- Where was Nuala when the diesel had to be filled?

P.S. For those of you interested in figures. So far we have travelled 3162 kilometres and used 1570 litres of fuel. We have used an average of 3.3 litres of fuel per hour travelled and that includes crossing the English Channel,  up and down the Rhine and all the times the engine is running while we are sitting waiting on locks! 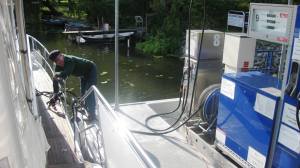 Adrian puts in diesel at river side filling station

Adrian puts diesel in the boat from cans

This entry was posted in C'est La Vie - The Boat, Experiences on the Canals, front page, On the Journey, Travel Tips and tagged Bauhaus, buying diesel for the boat, crossing English channel, Oberwinter Marina. Bookmark the permalink.

2 Responses to How much Diesel do we have? Will we run out of fuel?