Metz – A city of helpful People

On our journey up the Moselle we stopped at Metz. It’s a beautiful city full of flowers . The marina was in a perfect location in the middle of the city but more importantly the people were so helpful. Well half of them!

We arrived in Metz early in the afternoon to a cheerful welcome from the Captainaire. As he was so helpful and friendly, I got Nuala to give him a present of one of her famous Irish bottle opener presents. 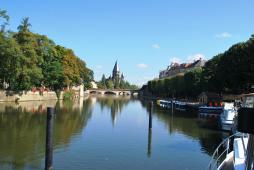 Metz City from the harbour

As our internet dongle had run out of credit (again), I rushed off to find the local SFR shop. I found a shop and went in to purchase credit. When I tried to speak to the shop assistant in my best French, he informed me he did not understand me. (I know my French accent is not good but I have got by for 6 months). I tried again and then a voice behind me said “Maybe I can help”. 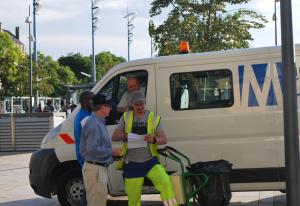 Stephan reads the paperwork for the phone watched by his supervisor

It was Stephan – a street cleaner who had come in to get credit for his phone. He spoke to the assistant who informed him that SFR did not sell Internet credit and I would have to go to a Tabac shop. Stephan translated for me and told me where to find a Tabac. I went to the Tabac, the owner told me he could not sell me credit and he directed me back to the same SFR shop. I exited the Tabac, frustrated and who came along the street pushing his dust car but Stephan. 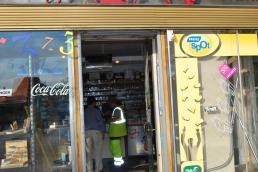 Stephan tries to get an answer in the Tabac

I explained to him what had happened. He went into the Tabac, had a long conversation with the Tabac owner, taking over the shop computer to search himself as to why I could not get the credit. We went back outside and Stephan’s supervisor joined in the conversation. He authorised him to take me to a different SFR shop. (He said, besides sweeping streets it was their job to help tourists!). He advised us to leave the bikes where they were, he would keep an eye on them. 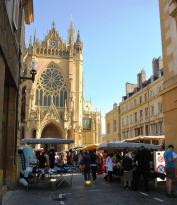 Stephan walked with us to another SFR shop, a few streets away, where low and behold there was no problem buying credit.  (This is France, same company two different shops- one will sell the company product the other wont!). On the way, we asked Stephan how come his English was so good and he explained that he was married to a Japanese girl and they conversed in English. He had met her on the Internet, gone to Japan to meet her, got married and brought her back to France. She loves it! We thanked Stephen for his help and he went back to work.

The next day, the Captainaire came down to the boat and said he heard I needed to get replacement gas cylinders. (We were almost out of gas, as I had purchased both cylinders in France and nobody in Germany would exchange them- are we in the EU?). He insisted on looking at the type of bottles we had. He then went away and looked up on the internet where to get replacements.

He took me with the two gas bottle in his car and we drove for miles to an out of town supermarket. When he got there, they would not take one of the bottles. It was the right type and I had bought it from the same supermarket chain in the North of France but they would not accept it. The Captainaire fought a valiant fight on my behalf arguing for about 10 minutes as to why they should take the bottle. The argument got very heated, I lost track of the French. There was no moving the lady behind the counter so we left with one bottle replaced and the other empty unwanted one. When we got back to the boat I tried to give him a tip for helping and it was as if I had insulted him, he said it was his job to help me!

So besides all the wonderful things to see in Metz it was the helpfulness of the people that we remember most- well one half of them. Is it a game or something? If the others were not such awkward souls, the helpful ones would not have had to work so hard on our behalf! 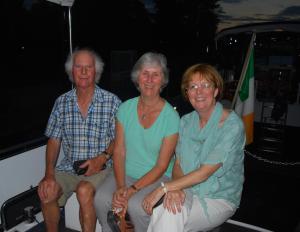 This entry was posted in front page, On the Journey, People We have Meet on the Gap Year, People who have helped us on our way, Places visited and tagged buying phone credit in France, French customer service, Metz, SFR. Bookmark the permalink.

2 Responses to Metz – A city of helpful People