Tuesday we planned to go to Geneva by car to stay with my daughter Louise and her family for Christmas. We were up at 7 am, Nuala has an appointment to get her hair done and 9 am and we planned to leave to leave at 11 am but we never got there that day.

Nuala with Eamon and Eve

Initially everything went according to plan. We got up on time. We had all the presents ready and bags packed. We managed all this despite the previous night being the coldest we had experienced in Chalon (-2 degrees) and the gangways were very slippy in the morning.

As we headed up the motorway at 11.20 we congratulated ourselves for leaving more or less on time. Then I noticed that the battery warning light has come on in the car and then the power steering failed. I pulled off the motorway and had a look. I knew it was serious. We decided to return to Chalon and we managed to nurse the car back to the Marina in Chalon. 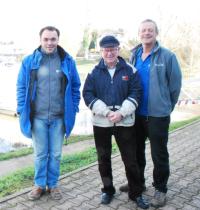 Thomas and Christophe at the Captainaire in the Marina were great. They rang around garages to try and get the car repaired but without success as it was Christmas time. Then they found a rental car for us, again no easy task as it was Christmas time.  We then had to switch all our luggage from our own car to the rented car and arrange for our car to be towed to the Mercedes garage to be repaired. Christophe insisted on coming with me to collect the rental car. It’s was now 4 pm and we are still trying to get to Geneva that evening.

We set up our Sat Nav to programme the route to Geneva in the hire car, but it would not work, as the cigarette socket was not working. We cannot manage without the GPS so we drove back to the hire company yard, the temperature was now down to -1 again and a heavy fog was descending. At the hire company yard we told them that the cigar lighter was not working- they tried to lend us a Sat Nav, but it did not work either, so they gave us another car. We had to transfer all the luggage from one car to the other (third time today) and then we were ready to set off. I looked at my watch – it’s now 6.30 pm its -1 degree with a heavy fog. I said to Nuala it’s too late and not safe to go to Geneva. So we reluctantly rang Louise and said we would go in the morning.

Nuala in the hired car Alps in backround

Next day we left early in the morning and drove to Geneva in two hours in + 6 degrees in perfect weather. The view crossing the Alps was specular so it was the right decision to wait another day.

It was worth all the effort and cost of renting a car as we had a great Christmas with Louise and Jo and grandchildren Eve and Eamon.

P.S. we just got the quote by email to fix the car. It’s for €1760 so I am afraid the car is a write off as it 11 years old and we spent €900 fixing it last October. So no point in throwing good money after bad. Nuala does not agree as she loves her car! Now we have to figure out how to get to Neil & Bernie in Portsmouth (Euro tunnel and ferry booked) for New Year and home in February! Any ideas?