Since we started our Gap Year we keep having amazing coincidences- Can someone please explain it to me?

Speaking to my new account manager Ben Aliaga-Kelly in Merrion Stockbrokers yesterday, he asked did I get the email he had sent with photos of the boat?  I said I had not and he resent on the spot. It showed two photos of our boat last Sunday, on the Seine. (See last Monday’s blog)

C’est la Vie on the Seine

He then went on to tell me about an amazing coincidence. He overheard one of his colleagues, Ivan Fox on Tuesday morning telling someone else  about the  great weekend that he had in Paris and that he has seen a small boat on the Seine. It was so unusual to see it among all the large tourist boats that he had taken a closer look and then realised it was flying an Irish Flag. He had taken some photos and was showing them to his colleagues. His wife Fiona had also signed up to the blog and left a message on it. His photos are the only photos we have of the boat moving on the water (we have to take all the other photos ourselves from the boat). 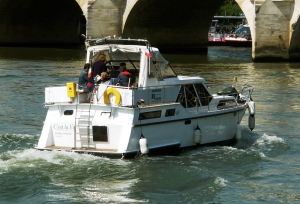 Ben then told Ivan that he knew me. What a coincidence, that someone from Dublin would be in Paris on the day we decided to take a trip back down the Seine. Also, the fact that he would have an interest in boats and would like to do a similar trip and hence why he noticed the Irish flag on our boat.

We have had many of these kinds of coincidences since we started this adventure. Finding the perfect boat. Nuala getting time off work. The Dover delivery team (Bill, Michael & Neil) helping me get the boat safe and sound across the English Channel to Calais. Meeting experienced boaters  on the route whose advice really helped – Tam and Di in Cambrai (who helped us get from Cambrai to Paris). Bill and Genève in Arsenal Paris whose advice is helping on this leg from Paris to Nancy. Dr Angelika and Franz Paulus from Berlin who gave us the contact for a marina in Berlin, which we have now booked and where we can leave the boat when we come back to Ireland in July. (It had been a big worry to find somewhere safe but not too expensive to leave the boat).

Why is this working out so well? All these coincidences? Someone is minding us and directing things. Anyone got any ideas? As they say on radio quiz shows “Answers on a postcard before 12 noon on Monday”! Nuala says it is a combination of Frederic Ozanam, Saint Padre Pio and an angel she has on her bracelet that the girls in St Vincent de Paul gave her! Adrian says will people tell us what they think with an email or comment on the blog..

Nuala and Adrian in front of the Eiffel Tower

8 Responses to Since we started our Gap Year we keep having amazing coincidences- Can someone please explain it to me?