Reims – a city of history

Recently on return trip from Ireland we stop at Reims. We always wanted to see it as many boaters had told us it was a beautiful and interesting city. They were right.

Reims was on the front line in the First World War and the city including the Cathedral was almost completely destroyed. After the war the city was rapidly rebuilt with up to 4000 architects brought in to working on rebuilding the city, all funded by financial aid from other parts of France or The United States.

This rapid rebuilding programme was a model for later post war reconstructions in other areas. They tried where possible to repair existing houses or when building new buildings, to blend them in with the old buildings. If you look carefully you can still see plaques on some of the buildings giving the name of the architect and that the structure was rebuilt with the help of the funding project.

Likewise the Cathedral, Notre Dame de Reims was almost totally demolished and it was rebuilt from copies of the original drawings. Rebuilding work started in 1919 and was completed in 1938, ironically just before the start of the Second World War.

detail over one of the doors of Reims Cathedral

The Cathedral, for centuries was the location for the coronation of French Kings, including Charles VII, who Joan of Arc fought to have put on the throne. The Cathedral was proclaimed a UNESCO World Heritage Site in 1991.

The city has many other famous churches and buildings and is of course,  regarded along with Epernay and Ay the centre of production of Champagne in France. Many of the famous champagne companies having their headquarters here, often in scrumptious former chateaus. Reims has many underground caves caused by extraction of chalk, dating back to Roman Times and now these are used to store the maturing bottles of champagne.

What I did not know, was that Reims was the setting of Germany unconditional surrender in World War Two. The surrender took place in a secondary school, which at the time was General Eisenhower’s HQ and it is still there today.( lots of students on lunch break outside)

There is a small museum built around the room in which the actual surrender was signed. For me the visit was a fitting conclusion to my many visits over the last seven months to war sites or museums. World War One and Two in Europe brought misery and suffering to countless millions (it’s impossible to visit any French town or city and not find statues and plaques commemorating people killed in the Wars) I know that many lessons were learned from particularly the Second World War and that we would not have the modern EU without the commitment of so many people who had suffered during the war never to have another war. I think it’s important that we remember this commitment and continue the work of maintaining a fair and just society where every person has the opportunity to maximise their potential. 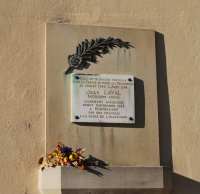 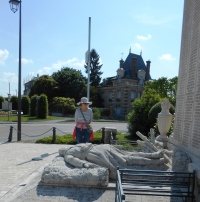 This entry was posted in comments on life, Comments on Social Economic Lifestyle in France, Places visited, Reflections on Life, world war two and tagged Cathedral in Reims, Reims. Bookmark the permalink.